After a coffee with my grandparents to thank them for the new ride and to say farewell for a while, I make my way to a newer-ish Edmonton neighbourhood in the city’s southeast.

Founded and operated by Cheryl Kaye Tardif, Imajin Books is a home-based publisher that focuses on genre fiction that is  sold mostly as e-books. You can’t not know of Cheryl if you live in Edmonton and are a part of the literary community. In years past she’s attended many conferences, often speaking about self-promotion.

I arrive and am greeted by her pomeranian, Chai, who is excited to play. In the kitchen I prepare for our interview while Cheryl makes me a coffee. As I’m taking off my coat and chatting, Cheryl comes to a halt and stares toward my arm. In that unwritten way that one human just knows from another, I freeze and look down. A spider is slowly making its way to the table from my elbow.

Thankfully one of Imajin’s writers, Kat Flannery, is there to snatch him up, squish him good, and throw him away! Crisis averted, we sit, sip blueberry coffees, and start talking shop.

Cheryl wanted to be a writer and had a great story in mind, but life was in the way. One day she told the story to a friend who, by the end, was crying and said, “You have to write this.” After a conversation with her husband (the two are a true team) about how much time could be afforded to write, Whale Song was born. Cheryl tried to go the traditional publishing route but didn’t succeed. And while she believed in the book and in the story’s importance, she didn’t have the cashflow to publish it herself. Enter her mother who offered her the money. In return Cheryl told her that, while it likely wouldn’t amount to much, she’d give her 10% of the royalties. A decade later, her mother still receives a cheque annually for “enough to send her on a nice vacation.” The book has sold well over 50000 copies and continues to sell today.

How? Cheryl is a master at selling and promotion. These are skills she picked up throughout her life in sales positions here and there where she learned to talk to (and read) people.

Whale Song was at one point picked up by a publisher. Unfortunately the experience was not a pleasant one. The company no longer exists, but she is happy to have had that experience. She learned what not to do.

Cheryl began writing and self-publishing and selling more books. Then she started receiving manuscripts from other writers who wanted her to publish them—this before she had even decided she would open a business. She hesitated at first but eventually gave in to publishing’s siren call. 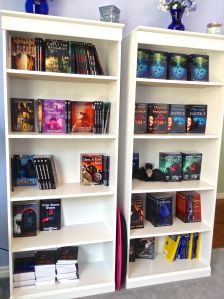 A selection of the books Cheryl and her authors have published.

Cheryl now has a selection of authors and many books up for sale. While the house might be under the radar to others in the industry, the business allows her and her authors to make money doing what they love to do, and they reach thousands of readers.

What I like about Cheryl is that she is open to the opportunities provided by anyone. Regardless of how big or small, Cheryl researches and tests them out. She recently pulled one of her e-books from all other providers except Amazon to participate in their list program. She explains how it works to me, but it went a little over my head (I’m glad I recorded it).Essentially, books are put up for free for a certain period of time, which is followed by a jump in sales.  She wasn’t sure if it would work, but the result of her experiment was a jump from the low thousands ($$) in sales in the first month, to the few thousands the next, to the many thousands the next. Seeing the success, she offered the opportunity to her authors. Note that it wasn’t a company decision to put all ImaJin’s books through this stream. Each author had the choice of how he/she wanted to market and sell books (and this is a policy she is adamant about).

Now the algorithms from Amazon are changing and books might not see the same success in the same way, but Cheryl continues to thoroughly investigate new options as they develop, always testing them on her books first. Cheryl plays the game, adapts as the rules change, and coaches her authors accordingly. In this way she operates not only as a publisher, but as a mentor—one that her authors very much appreciate.

She is a business woman, indeed, but at the heart, ImaJin Books is about dreams and about making a difference in the world in the way you know how to, and in the way you want to, regardless of what other people think.

Cheryl and I have a history. Years ago I knew of Cheryl after seeing her in and around conferences I was attending in Edmonton’s writer scene. I purchased one of her books as a gift at a trade show (couldn’t say no—she’s good!), but later rolled my eyes a bit… you know, self-publishing and all.

A couple years later I found myself at an art show, mesmerized by a huge and colourful painting of a whale. I asked  artist Aynsley Nisbet where the inspiration for the painting came from and she said, “I read this book called Whale Song and it changed my life.” Turns out it was Cheryl’s book that gave Aynsley the courage to start painting again. I knew I’d probably see Cheryl soon at the next conference. Sure enough, she was there. I reintroduced myself and told her about the painting. The two connected and have since maintained a relationship. In fact, Cheryl commissioned Aynsley to paint an outstanding family portrait (hands down the coolest family portrait I have ever seen).

Amazing, right? In it are Cheryl, her husband, and her children. Their astrological signs are worked in, and so are the family pets!

I tell this story because it proves that a book, regardless of its publication method, can still have a huge influence on the people who read it. Also, it shows the rewards of doing something anyway, even if it’s initially not taken seriously or is shot down by your peers.

I held a stigma toward Cheryl in my early days as a part of Edmonton’s lit community. I freely admit that and imagine that I’m not the only one who did. But after meeting Aynsley, and even more so now that I’ve had the chance to sit down with Cheryl and pick her brain, I have nothing but the upmost respect for this woman and truly admire how she’s developed a life where she is successful while upholding her values and helping others achieve the same.