When I booked in houses for the tour, I just went with whatever fit best for everyone. There was nothing strategic, just what days and times worked for who (and I hoped they weren’t on opposite ends of the city). For April 17: House of Anansi and Coach House Books.

In my (too few) spare moments I’ve been reading the book The Perilous Trade, and the night before I’m to meet both Anansi and Coach I learn something. Now, we’ve seen that there are lots of couples in publishing, but did you know that House of Anansi and Coach House Books were once married? Look it up. The marriage didn’t make it past a few months, irreconcilable differences surrounding work habits and influences of the time (by that I mean drugs). But hey, it was 1969.

So is it coincidence that I’ll be meeting both of these houses today or is it something larger at work? 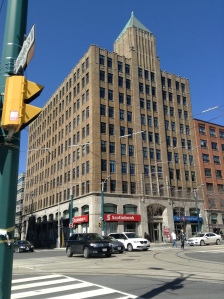 You’ll find House of Anansi on the 8th floor.

I find House of Anansi on the corner of Spadina and Adelaide. The elevator takes forever! But when I finally make it to the 8th floor I find Matt Williams. Matt came into publishing because it was the path of least resistance, he says. His father was an agent, his mother an editor. Fast-forward to 2002 and their son is one of three folks running House of Anansi post-distributor fiasco. Skip ahead again to today and he’s one of 28 House of Anansi employees.

Having visitors in the Anansi office is not new. There’s a great series of articles in The National Post by Mark Medley who follows them throughout the course of last year.

House of Anansi moved to their office space on Spadina in 2002. Eventually they were breaking down walls. Literally. They literally tore down (and built up) the walls in their office as they took over more of the 8th floor to make space for more people. Matt describes meetings where staff sat around a table with a blank sheet of paper and pen, sketching out what they wanted their space to look like, making considerations such as high windows to allow as much light in as possible. 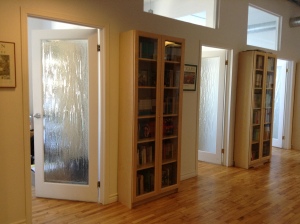 My favourite design consideration is the windows at the top of the walls (so the editors don’t hog all the light).

The result is a space that seems to blend seamlessly from its original hardwood floors to the modern space-efficient and bright design with bookshelves that line practically any and every wall.

After a conversation about Anansi and the publishing industry as a whole, Matt introduces me to the staff. I’m excited to meet everyone, but I know I’m missing out on dozens of other publishing stories by not getting the chance to sit down with each member of the team. To all of you there, if there had been more time I would have. Call me.

Throughout my conversation with Matt, he often refers to luck. Luck, he says, is a factor in House of Anansi’s success. Lucky books. 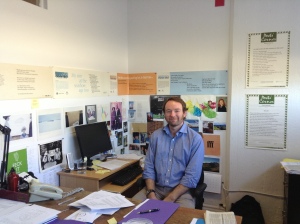 “What we do as publishers hasn’t changed from what we used to do.” — Matt Williams.

Now, I didn’t ask Matt about his heritage…but his hair does have a reddish tinge to it. And his father lives in Ireland. And the way Matt says Ireland (Aherlahnd)… Hmm. Luck of the Irish, perhaps?

I’m not sorry to say that I disagree completely with this notion of luck. I don’t believe in it.  Fortune follows people who live well, who work hard, and who make good decisions.

Here’s a fact: of the pile of submissions that come into the Anansi office, every one is considered. Also a fact: In each of the last three years House of Anansi has had a book shortlisted for the Giller prize (two in 2011), and many other award badges grace the covers of their books. 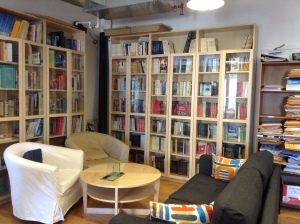 In the shelves, the library of House of Anansi books. To the right, the submission pile (in which there might just be the next “lucky” book).

On deck: a tour through the Coach House!

Error: Twitter did not respond. Please wait a few minutes and refresh this page.