After spending the night in Alexis Kienlen’s childhood home in Saskatoon (her parents are fantastic), I hit the road again, this time to Regina. The catch? Snow. Surprise.

The radio doesn’t recommend driving on any road out of Saskatoon…except the one to Regina. Perfect! But oh my. Winter highways are much different in Saskatchewan than in Alberta. The change from icy to dry and dry to wet to icy to wet to dry to ice, dry, ice, wet, ice, dry. It happens quickly and often. Today the conditions on some stretches are whiteout.

I find myself behind a couple of semis crawling forward at a safe and steady pace. I’m not shy about leaning in for their protection, using their size to block the wind and snow and their lights as guides. (This is a good time to remember my mammoth/deer analogy from my previous post.) I know the semis know I’m there.

Eventually the roads clear up a bit and we’re passed by a white F-150, so I bid adieu to my adoptive herd and pass them too—I have to make my meeting at Coteau Books at 10:00 am. And BAM. Ice patch. Not just a thin layer, but a chunky mess as though spewed from a crushed-ice machine. I start fishtailing across both lanes. Ahead of me: a jackknifed semi half in the ditch, his trailer perpendicular to the road.

If there’s one thing I’m able to do it’s to keep calm in a situation like this, and I do. I steer the wheel carefully back and forth (I swear snowboarding has helped prepare me for this) and I pump my brakes. Got it. I’m back in control.

The man in the F-150, to be frank, is an ass, throwing one hand in the air and turning to yell at me through the window, but I can’t hear him. I feel my face go pale. After we pass the emergency crews around the ditched semi, I get back behind the herd.

I arrive in Regina right at 10. From a gas station washroom I send quick note to Coteau to let them know I’m close. It’s not until I throw on some mascara that I realize my hands are still shaking. But there is no time! I take a few breaths, get back in my car, and drive into downtown Regina. 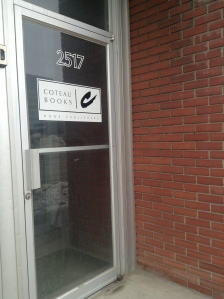 I walk up and down Victoria street for a while before realizing my eyes have been bypassing the sign on the glass door to Coteau Books’ building. Managing editor Nik Burton’s office looks out onto the street and I wonder if he noticed me frantically up, down, and across trying to find him.

Nik  has been with Coteau Books since 1996. He wears a tie to work every day, from Labour Day to Victoria Day. He’s gotta! What else is a man who owns over 200 ties to do? This isn’t a house rule, though. His staff is allowed to come to work in whatever they please.

Coteau publishes 10 titles a year that span from poetry and fiction (50%), to YA (25%), to non-fiction (25%). As I’m finding common, the non-fiction titles are used as moneymakers to support the literary habit. Despite the variety in types of books published, Nik still considers Coteau Books a literary press, stating that the YA titles are part of the literary list. Either way 75% of published books literary = literary press. I agree. It is easy to assume that literature written for youth is bland for anyone but kids, wrought with clichés and generally simpler all around, but that’s wrong and Coteau’s YA list proves it. Their YA titles are more along the lines of “youthful adult” than teen. It’s a distinction still finding its balance in an industry where young people are looking for more mature reads and more mature readers are looking for something younger feeling.

Coteau chooses the books for its list in the same way as many small literary presses, via editorial board (after appropriate skimming, of course). But after a tour of the office space, I find the boardroom to be an extension of the storage room. With boxes piled upon boxes, I can barely make out if there is or isn’t a table in the space. So where does the board go to make their decisions?

Saskatoon. The board president moved to Saskatoon and thus that is where the majority of board operations take place. Teleworking means that Coteau Books operations do not have to be centralized. At one time Nik had an employee who spent several months in BC while continuing his post with Coteau. Nik is sounding more and more like my favourite kind of boss!

But why is it that with a board in Saskatoon, the publishing house has stayed in Regina (after, for the record, moving in from Moose Jaw)? Why not move the press to Saskatoon? Nik tells me that if it did move he would be prepared to go with it, but Coteau Books receives municipal funding that doesn’t exist in Saskatoon and so for now the press will stay in Regina.

Coteau, with a longstanding history, is looking to the future just like other presses in terms of going digital. Part of the new ground is book apps, in particular for their nonfiction list. Books like their gardening book Prairie Xeriscape or the monthly Women’s Calendar that they publish every year will do well as apps and will continue to help Coteau support their literary habit, which includes doubling their poetry list in the coming year.