2nd from the top.

April 3 was spent mostly around Granville Island. I love the energy there. The word that came to mind was “wharf,” but I haven’t a clue if it is or even was indeed one because I’m not 100% sure what “wharf” means. The boxy, metal buildings coupled with the smell of the sea makes the area rather nautical. That and seagulls. Everywhere. There are signs that warn against the seagulls that look like they steal candy from babies on a daily basis.

And somewhere in the shadow of the Granville Bridge is Tradewind Books. Damn was it ever hard to find! A boat and sails logo for a publisher is uncommon. For a business on an island? Not as much. Full disclosure, I really had to pee, and every traveller knows that it doesn’t matter how good your map app is—if you have to go, you might as well be blindfolded and spun around five times at each corner you take.

I did find it eventually, down a small alley, in an old building with narrow hallways.

When I walked into Tradewind Books I found publisher Michael Katz at his desk surrounded by envelopes and paper submissions. Behind him were massive windows and a view straight out over the harbour.

Michael rents out the desk to the left once a week to a writer.

When he realized I wanted to take pictures, Michael was up and tidying the space around him. I assured him that it wasn’t a problem and that most people’s offices were cluttered. That’s where my fave quote from him comes from.

Tradewind Books began in London where Michael was working as a school teacher. When his wife and co-publisher Carol Frank got a job at SFU, they moved to Vancouver and brought Tradewind Books with them.

I sat on the office couch, bright blue walls all around me, and each question I asked was answered with a stack of books. In no time I had over 20 in my lap, including one that has sold over 30,000 copies and one that has been nominated for a BC Book prize this year. Flipping through them, it’s no wonder Tradewind Books has received so much success. The quality in not only the story and illustration, but in the paper and bindings is evident. The weight of the book in my hands, the silkiness of the pages between my fingers, the sound as I crack open the spine brought me back to elementary school. As I flipped the large glossy pages—pulling in a corner, watching the page inflate and then gracefully fall to the other side— I saw a sail in the wind.

Michael was proud to show me that a recent title has made it onto a very select children’s book list that will be sent to librarians and schools across the continent. Getting on these lists and winning awards are what sells Tradewind Books. As long as they can keep doing that, they will continue to publish the six books a year that they do. 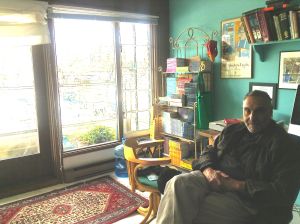 Awesome light from a sweet office view means bad light for trying to take pictures of it. This pic in no way does the space justice, but is a little taste.

Michael is happy with where his business stands. He doesn’t need or want to get bigger. That said, he isn’t blind to the changing publishing landscape around him. He is a dichotomy of a man. He two-finger types, but he types on a Mac. He publishes print books, but he’s hiring someone to build book aps.

In between showing me some videos of a children’s opera that Tradewind Books is a part of, and answering some emails with one of his editors, Mr. Katz answered my questions. Then got a phone call and had to leave. While I was disappointed that I didn’t get the chance to dive deep into conversation with Michael, having been able to see the assuredness and serenity of someone who simply knows his business and does his business was encouraging.

The Literary Press Group of Canada

For four and half hours I sat at Blondy’s Café. In that time, I worked on the blog, had a coffee with an old friend, caught up on the Twitter, and added more people to the itinerary as I head east. (Also in this time, Blondy’s had maybe four customers. Huge construction projects along West 4th are affecting businesses hardcore. If you’re in Van, go to Blondy’s. They’ve got a great lavender latte).

For dinner, I was invited out by Taryn Boyd from the Literary Press Group of Canada. The waiter had a hard time getting our order because we so quickly got involved in a publishing conversation that we hardly remembered to look at the menu.

You may not know about LPG Canada now, but if you’re a book lover I guarantee that you will in the next year. I got inside information on a very cool project that’s going to benefit both the small publisher and the reader. Even that might be saying too much, but it’s going to be pretty awesome so stay tuned to their website and twitter feed (@LPGCanada).

Next up: Storypanda and Arsenal Pulp Press. And lots of rain, I hear.