The B&G office from the outside

I woke up at 5:00 am to be ready and at the #YVR ferry terminal for the first ship out to #YYJ. Luckily my body is on Alberta time, so it wasn’t hard. I remained in transit until just after 10 when I walked up to the “Medical Arts Building” on Pandora Avenue. The Heritage Group (of which Brindle & Glass is a part) is on the 3rd floor.

You could describe the Heritage Group/Brindle & Glass office as either cramped or cozy. I lean to the latter, original artwork by the staff designer (Pete Kohut) being one of the reasons. Also, a pooch named Nutmeg, who lounges around the office on her back adds to the homey feel. Go figure, B&G will only be in this office for another month. By the time I am finished this tour, B&G will be in a larger office that will allow space for more staff.

Pete, with a sample of his artwork in the right-hand corner.

Ruth Linka manages both B&G as well as Touchwood Editions. B&G is her creation that she began with a partner while she was leading NeWest Press in Edmonton. She called it “hobby publishing,” and the board at NeWest was happy for her endeavor.

Eventually her partner left; needing more financial resources for his family, he became an electrician. Ruth, with a growing business after the success of a couple of books, eventually left NeWest and joined The Heritage Group in Victoria. I asked if she found a difference between publishing in AB and BC. She responded with a fast yes. Simply put, there is more funding available to publishers in BC.

She feels a difference in community, though. Where Edmonton’s literary community is very interconnected, open, and strong, Victoria’s community is one she has yet to tap into. She has been hosting a reading series (not limited to B&G authors) where she is developing the kind of literary community she wants to see on the west on the coast.

Every photo op is a publicity op! Ruth made quick decisions for which books to hold and display behind her.

What I like about Ruth is she keeps it real. The office is a comfortable space to work and hours are flexible, but it is still a business and there isn’t an enormous amount of time spent at the water-cooler, as she put it.

Work is heavy. Of the five to ten manuscripts she receives a week, about half are rejected immediately and the rest are brought home to read during her “off-hours.”

A manuscript has about 30 pages to grab her, though she will often finish books right to the end anyway. Recently Ruth was aboard a ferry when she opened up a manuscript submission she was expecting not to like. 90 minutes later the ferry docked and Ruth had yet to look away from her Sony e-reader.

When I asked her if that meant the book would get published, she couldn’t answer for sure. B&G publishes eight books a year, about half of which are fiction. While her personal  biases can automatically axe a book’s publication with B&G (for example, books on terrorism, war, etc. need not apply because it is simply something she does not like to work with), a favourited book for Ruth still has many gates to get through before the author gets a contract. But for this one, maybe.

Fave publishing quote: “I find I’m overly optimistic sometimes, but you have to be optimistic in publishing.” – Ruth Linka.

The doorway to Friesen Press.

Friesen Press is just a few streets away on Fort and is also located on the 3rd floor.

I’ve worked in many different offices over the years, from small two-woman shows to giant corporate groups. When I walked into the Friesen Press office, the atmosphere was a blend of all types. With the exception of president Tammara Kennelley’s office (with open door and huge window), the space is one large, open room with glass desks. People are grouped by responsibility. Author account managers line the walls; the sales team is grouped together at another end of the office past the break room; promotions personnel are clustered toward the centre, as are the designers—identifiable by their shiny mac computers.

Staff hard at work on a Tuesday afternoon.

Friesen Press is in the business of assisted self-publishing, meaning that they don’t simply take an author’s content and unread slap it between a cover. Instead authors are coached through each part of the process as they make decisions on things like cover art, back cover copy, etc. Each book, while not read by everyone working on it (there just simply isn’t enough time when the company has as intake of ~100 books a month), is read by a professional editor who provides feedback to the author. (I’ve been one of these editors since the end of 2012.) Should the author choose, he or she can then purchase a copyedit to ensure their text is error-free.

The focus at Friesen Press is customer service. It’s about providing the author with a finished product that he/she can be proud of. 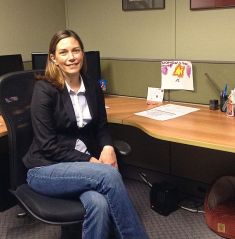 MIA in this shot is the office dog, Solo.

There is a stigma to self-publishing among writers, but the reality is that not everyone will have the chance to publish traditionally (and many who come through Friesen Press have never intended to do so in the first place).  Are there some who come defeated after pitch and rejection, pitch and rejection? Of course, but in the end their book becomes accessible—despite the climate of the industry—where as many other books stay in the land of invisible digital files.

My question was whether the self-publishing stigma existed among publishers. The answer? I would say that if it does, the people at Friesen Press are too busy to care. Tammara is a strong woman with a strong conviction for what she does. She, like many of her employees, does not come from a publishing background, but from a business background. She is excited to, along with providing a good and ethical service, continue to further the company’s success.

Rest assured that this is not a cold-hearted corporate environment. Sean Ho is the director of author services and the guy who divides authors and books among his team. His thrill comes from seeing how he brings a writer’s dream to fruition, and at times he finds himself engrossed in the stories. On his desk is a pile of personal favourites that he’s had a hand in publishing (and a copy of Eats, Shoots & Leaves, as he continues to educate himself on the intricacies of editing and story).

Sean next to some of his favourite titles.

Currently there is no in-house editorial department for the press. I asked Sean if he thought they would eventually open one. In response, he asked if I would work there if they did. The answer? No. The environment is admittedly not the quiet and secluded space I would require as an editor, and we figured that most editors would feel the same (perhaps we’re wrong). Though it wouldn’t be my chosen work environment, I can’t help but feel uplifted by the positive energy that seems to buzz.

I got to see the machine at work, from an author manager on the phone with a writer discussing the publishing process, to a designer choosing the font for another author’s cover, to the preliminary sketches for an upcoming children’s book. Stigma or not, this business is doing well and will continue to do so.

Fave quote (on the topic of social media): “I don’t think it matters whether I believe in it or not.” –Tammara Kenneley.

Get On the Doc Bus

After allowing myself an hour or two to walk and get lost in Downtown Victoria, I met up with Mandy Leith who coincidentally (or is it something in the stars?) is planning a cross-country tour this summer with the goal of exploring the climate and community of documentary film making. I didn’t realize that the doc industry was also feeling a sense of distress, and the parallels between our two industries and our journeys in planning a cross country tour were similar. You can check out her project here.

Next up: A look into children’s book publishing with Tradewind Books and a conversation with The Literary Press Group of Canada. Also, some Thai food.